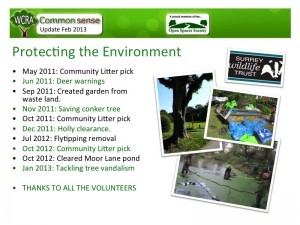 The AGM started with an overview by Chairman, Bill Corney.

Bill described what WCRA had been up to since the last AGM. This covered items such as the common land litter picks and pond clearance in conjunction with Surrey Wildlife Trust.

He presented other initiatives that had been taking place such as the newly set up Speed Watch Group and activities to eliminate anti-social behaviour in the area such as the recent efforts to address the tree vandalism occurring in the wooded patch adjacent to Sutton Green Golf Club. 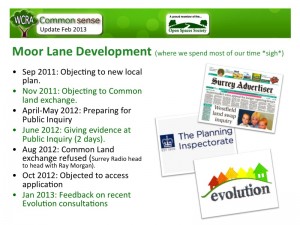 He also described the high-level actions that WCRA had conducted to represent member interests regarding the ‘Moor Lane’ development.

Next to stand up was Treasurer, Stuart Goldup who gave his treasurer’s report; covering funds in the WCRA coffers and what the last joining fees had been used for. He also pointed out the many donations given for free from members including printing of leaflets, newsletters and the administration of the WCRA website.

Then we get to the crux of the matter. The meeting was called to gauge feedback from the local community and give them a voice following the development consultation which took place in early January. 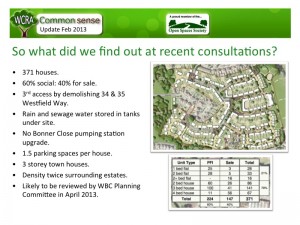 In order to get relevant feedback from the attendees, the committee had set up survey groups at each of the tables.

Nicola Cull, WCRA Secretary, set the scene describing the session to start with group discussions, followed by each individual completing the survey papers set out on each table. At the end of the group discussions feedback was given to the larger group by each of the table facilitators.

WCRA will publish results of the surveys in due course, but in the meantime the members directed the committee to engage with Evolution directly on matters of concern.

Finally Chairman Bill Corney wrapped up proceedings with “Any Other Business” covering re-elections, membership renewal and agreement for the priorities for 2013.

Plans are afoot to organise a follow up meeting in early March to include representatives from the Evolution Consortium and other interested parties.

Posted On 1 July 2009
The report is attached (click on this link Planning Officer Report) and can be also accessed from the Woking Borough Council site here: WBC Website. Unsurprisingly…

Seasoned and frankly unseasoned WCRA members are hoping to raise funds for charity by completing the Surrey half marathon 08 March 2015.

Posted On 3 January 2011
Just prior to Xmas you will have received a notice letter from WBC regarding a proposed common land swap. The consultation period has NOW been…