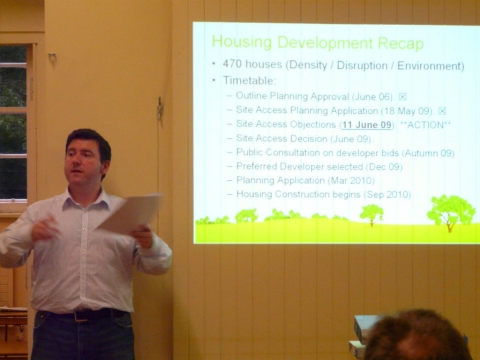 Around 87 people attended a public meeting on the 5th June for a presentation by WCRA covering ratification of the association and an update on the Moor Lane Housing development. 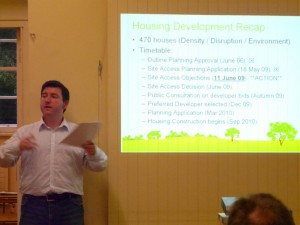 A copy of meeting presentation slides can be obtained below:

The association was formally ratified and the constitution was unanimously voted for adoption.

The following officers were duly and unanimously elected to serve an initial one year term of office:

A total of £475 was donated by attendees comprising membership fees and voluntary donations.

A big thank you to everyone who attended and helped make the night a big success!

The minutes of the meeting are shown below:

Bill opened the meeting, welcomed everyone and thanked them for attending. He explained that everyone at the meeting was an honorary member for the night and had the right to vote.

A number of people have already volunteered to act as street representatives and their names will appear on the website along with the names of roads where reps are still needed. These people will be a local point of contact for distributing newsletters and providing verbal updates to residents. Anyone wishing to become a street rep should contact Bill or Nicola.

Bill asked residents whether they would be prepared to pay a fee of £10 per household and £5 for a single person household /concession. The majority of people indicated that they thought this was reasonable. People were asked to complete application forms if they had not done so on line and wished to join. A large number of people opted to join and paid fees to the Treasurer at the end of the meeting. The fees will not be used to cover officers’ expenses ( ! ) but will be used to cover printing costs, use of consultants and room hire ( £55 for tonight ). The Treasurer will publish records of income and expenditure.

Bill outlined the known facts regarding the proposed housing development north of Moor Lane (the structure of which is shown on the attached presentation). The PFI grant to Woking Council is £43M.

The meeting moved on to discuss the proposed Moor Lane development. Bill asked for a show of hands to indicate who was opposed to the development. The response indicated an opposition of about 80%.

The meeting considered whether there had been proper consultation in 2006 and whether it was worth challenging the approval, perhaps by holding a meeting with the planning officers.

A lively Q&A session then ensued, with both questions and answers from the floor.

A total of £475 was raised on the evening comprising £385 in subs (from 41 households) and a further £90 in voluntary donations.

All matters having been considered the meeting was adjourned.  Thanks to all who attended and contributed.

Great to see lots of residents out cheering on the @surreyhalf marathon today.

Works to plant new trees on Balfour Avenue to replace the ones that were cut down to widen the road are due to start 10 Feb 2014.

Join us for a guided tour of Westfield Common with Surrey Wildlife Trust.