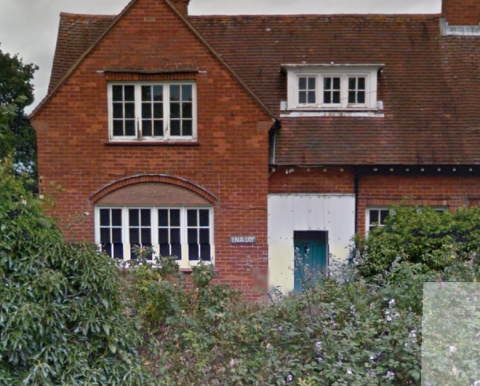 Surrey County Council have announced plans to start the refurbishment of Enacot on Moor Lane.

The intention is to extend and refurbish the property before letting it out to a tenant.  This is very much welcome news as the property was in danger in becoming derelict and its lack of maintenance was causing problem for Mrs Lovett, who lives in the adjoining property, Rosecot.

Due to its proximity to the Kingsmoor Park development, SCC have released a statement to explain the development.  The plans show internal refurbishments plus the creation of a rear extension to increase the bedroom space of the property.

Surrey County Council has commissioned refurbishment works to a house in its ownership, known as Enacot, in Moor Lane.

The contractor for these works, Walker Construction UK Ltd, will be starting on site on 10 March; it is estimated they will take 13 weeks to complete.

Walker Construction has delivered the attached letter to the residents of nearby properties in Moor Lane.

Walker Construction is aware of the sensitivities of large vehicles going down Moor Lane and their operators will try to be as considerate to the local residents as possible, for example, because Moor Lane is a narrow road, deliveries of steels and bricks will not be on the back of articulated lorries.

Working hours will be limited to 7.30am to 5pm with no noisy activity prior to 8am.

Any queries about these works should be directed to the full time Ena Cottage site manager who will be on site (at Ena Cottage) during the contract period. Walker Construction’s Head Office can be contacted on 01303 851111.


Aside from this there are a number of other refurbishments going on down Moor Lane that are not part of the Kingsmoor Park development:

Any issues should be brought to our attention.

Posted On 22 May 2012
Come and celebrate theQueens’s Diamond Jubilee with your neighbours Please bring something to drink and to put on the BBQ! Games for the Children Sunday 3rd…

Posted On 21 June 2009
One of our members has spoken to Katie Dunk as to when the committee might be meeting, re: the Access Application. Katie said that it…