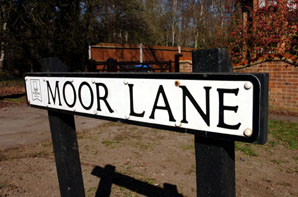 One of the thorny issues regarding the so-called ‘Moor Lane’ development is the means of access to the housing site as a site of this scale will require multiple road into and out of it. Indeed the working title of the site as the ‘Moor Lane’ development appears to deliberately obfuscate the issue as a) the site is north of Moor Lane b) Moor Lane itself is in the green belt and c) the highway authority will insist on more accesses.

Access is a sensitive matter as residents north, south and west of the housing site differ in their opinions of where access should be. Thought has to be given to minimising the impact of any road accesses on protected Westfield Common to the west and south of the site. Finally, the costs of developing the accesses into the site need to be considered.

However, the Priority Homes team have now confirmed that Moor Lane will NOT be used as an access. Make of this what you will but the question remains – why is it still referred to as the Moor Lane development?

A transcript of the the letter from Priority Homes, in response to an enquiry from a Moor Lane resident, is shown below.

Thank you for your email dated 4th July regarding access to the development site north of Moor Lane.

At this stage the Council is not intending to use Moor Lane as a main access to the development site.

The County Highways Authority (CHA) would require significant changes to the Moor Lane carriageway for it to be used as a major access to the site. Some of the land required to achieve the necessary road structure to provide an access from Moor Lane is not in the Council’s ownership and would therefore require a Compulsory Purchase Order (CPO) of 3rd party land. However, a CPO would be difficult to justify because a detailed options appraisal by an independent highways engineer identified viable alternatives (not requiring the use of Moor Lane) which satisfy CHA requirements.

The Council is therefore not intending an access from Moor Lane itself to be included in any access planning application to the development site that is made by the Council.

However, in a separate study the highways engineer has determined that it may be possible for a small number of units to be served from Moor Lane itself without requiring any carriageway widening or major junction improvements. If the small number of units requiring access were to the eastern end of the Moor Lane, it may require at least three passing places along the length of the narrowest part of this road. Those currently bidding for the rights to develop the site may wish to pursue this possibility.

Another option would be for the bidders to investigate the possibility of achieving an access, again, for a small number of units, at the western end of the site, where the Moor Lane carriageway widens. This approach would require an assessment on the deliverability of such an access bearing in mind the common land status of the land between the road and the site.

In summary, minor access from Moor Lane, if any, would be addressed by the bidders in consultation with the County Highways Authority at the Masterplan stage and by the Local Planning Authority at the detailed planning application stage.

We will be holding a public consultation on Saturday 19th September between 11am and 4pm at The Moorcroft Centre for the Community.

We hope we have helped in some way to answer your queries. The Council will continue to keep residents informed as the project progresses. If you would like further information regarding Priority Homes please refer to Woking Borough Council’s website at www.woking.gov.uk/priorityhomes or call 01483 743891

WCRA provides an overview of what is proposed for the massive housing development north of Moor Lane.

Local residents issue a warning to the Council and developers over proposals to change the nature of Moor Lane.